It's my privilege to have here with me on the blog Aussie author Ambelin Kwaymullina. Her Young Adult debut, The Interrogation of Ashala Wolf is an original, adrenalin-packed and thought-provoking sci-fi/fantasy, post-apocalyptic/dystopia with a gorgeous Aussie flavour. (make sure you check out the book trailer at the end of this post!)


Nomes: There are so many things to love about The Interrogation of Ashala
Wolf but the thing that struck me the most was how vividly the entire
book played out in my mind. I am huge visual person and I loved the
richness of the setting. You have a talent for not only describing a place,
but for transporting readers there. I am really curious about how you
crafted your setting and if visual inspiration played a big role in bringing
your story to life.

The setting in your book is so full of life it seems to be a character
unto itself. The Firstwood brims with life and a strong sense of history.
Are there any locations you imagined while bringing the Firstwood to
life?

Ambelin: When I’m writing, I see everything happening in my head. Because of that,
its really important to me that I describe everything as well as I possibly can
– I want my readers to see what I see, or rather, what Ashala sees, since the
book is told from her perspective. I drew much of the ecology of the Firstwood
from tuart forests, which grow in WA, and are one of the rarest forests on
earth. There were once thousands of hectares of tuart trees, and now the last
of them survive in remnant forests. It seemed right to me that these tough
old trees would live through the end of the world, to grow again into the vast
forest that Ashala lives in. Some of the other plants in the Firstwood exist in
this world too - the ‘’stumpy black trunk with long grasses spraying out the
top” is a grass tree, and the “shrub hung with brown pods filled with black
seeds” is a red-eyed wattle.

Of course, the ecology has changed somewhat, being as the Firstwood exists
three hundred years after the end of the world, when the tectonic plates have
shifted and formed a new, single continent. So there are animals around that
don’t exist now (saurs and sabers) and others that don’t live in Australia, like
wolves (although form the description in the book, wolves are more like a
cross between a dingo and a coyote than wolves as we know them now). I’m
really looking forward to having the chance to explore the Firstwood more in
the next book in the series.

Nomes: You mention in an earlier interview how connected you feel to your
country - "For me it is the purple hills, red earth and endless blue sky
of the Pilbara region of Western Australia where my people, the Palyku,
are from. (This sounds incredibly moving and gorgeous!)" (source). Do
you think this strong connection you feel influenced the setting in your
novel and how Ashala feels about the land?

Aboriginal people, like Indigenous people elsewhere in the world, have a
strong connection to their homelands, their country. Ashala’s ancestors were
Aboriginal people, although she lives three hundred years after the world
ended when people no longer distinguish between themselves on the basis of
race. But she carries that inheritance, and she has that same love and deep

Some stunning pics of Ambelin's heritage, the Pilbara Region in Western Australia: 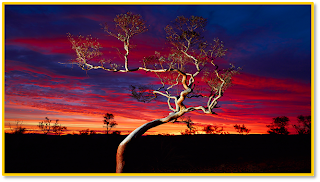 Nomes: I love how you contrast the stark facility in which Ashala is detained
against the wild and free (though still somewhat deadly) landscape of
the Firstwood. Did the contrast evolve naturally or was it a conscious
decision to develop it that way?

Ambelin: I think it evolved as the book was written. But it was also a product of the
kind of place the centre is. There’s actually parts of the centre that are trying
to look a bit more friendly, like the little houses where they’re putting the
detainees, and the park. But the government fails miserably to make it seem
like anything other than the prison it is. We’re seeing the centre from Ashala’s
perspective, too, and she’s unconsciously contrasting it with the freedom she
associates with the trees and open sky of the Firstwood.

Nomes: While The Interrogation of Ashala Wolf is set in the future, it also has
a strong sense of the past. It was easy to picture how the world was
before, during and after The Reckoning. You've captured the changing
nature of landscapes and how that affects people beautifully—how do
you feel about the way we treat the land now? And what we can do to be
better, as caretakers?

Ambelin: It breaks my heart to see the ancient places of the earth destroyed. And
we are putting, not just the many ecosystems of the planet, but our own
species in jeopardy. For some time now, scientists have been warning us
about reaching ecological ‘tipping points’, where human beings will have
done irreversible damage to the planet that sustains us. And I think the
way for each of us to start being better caretakers is to simply be informed,
and get involved. In the age of the internet, most of us have easy access
to information. It’s not difficult to find out about small improvements we can
all make to our daily existence to live in a more sustainable way, or about
campaigns we can get involved in to protect forests or oceans, or about big
ideas that will change the world.

In any given day, we all make a thousand choices, and those choices create
the future. As long as we know that, we can all change the world.

Nomes: I love the saurs in your book. I know they are powerful and
deadly but a part of me imagined them as a little bit cute. Did you have
any images in mind that helped you bring them to life?

Ambelin: I think they are cute, in their way – and certainly mischievous, although you
wouldn’t want to get on their bad side! I very loosely based the saurs on a
species of megafauna, megalania prisca – big carnivorous lizards that lived
in Australia thousands of years ago (although I gave the saurs much longer
necks). To get an idea of how they might move, I looked at perentie lizards,
which can grow up to two metres long. If you’ve ever seen a perentie stalk

along the ground, I imagine the saurs would move in pretty much the same
way.

Will the Tribe survive the interrogation of Ashala Wolf?
"There will come a day when a thousand Illegals descend on your detention centres. Boomers will breach the walls. Skychangers will send lightning to strike you all down from above, and Rumblers will open the earth to swallow you up from below ... And when that day comes, Justin Connor, think of me." Ashala Wolf has been captured by Chief Administrator Neville Rose. A man who is intent on destroying Ashala s Tribe - the runaway Illegals hiding in the Firstwood. Injured and vulnerable and with her Sleepwalker ability blocked, Ashala is forced to succumb to the machine that will pull secrets from her mind. And right beside her is Justin Connor, her betrayer, watching her every move. Will the Tribe survive the interrogation of Ashala Wolf?
Official Website