The Comet Box by Adrian Stirling

It's 1986 and Halley's Comet is hurtling towards Earth. Everyone is talking about what the comet will bring - wishes could be granted, people might go mad, great disasters could happen...

When Andrew is asked to write down his greatest wish for the Comet Box, he can think of only one thing – that his runaway sister Amelia will finally come home. As the comet draws nearer he begins to learn the reasons why she left in the first place and the more he learns, the more he wants to forget.
When Amelia is captured and brought home she reveals a shocking secret that makes Andrew's once safe world begin to unravel. As the comet arrives, Andrew must choose whether to be blind to the mistakes of the people around him or to side with his sister as she tears his family apart.
I was so looking forward to Adrian Stirling's sophomore novel after pretty much being blown away by his debut Broken Glass. My expectations were high and he absolutely delivered (yay!)
The Comet Box is quite different in tone and atmosphere to Broken Glass. In Broken Glass, Stirling nails that gritty, claustrophobic and tight knit feel of a dusty small country town community. It was a sensory and gripping read, tense, vivid, absorbing and featured an astonishing climax.
While the Comet Box is different in setting, era and themes, it still shines with the same brilliance that blew me away in Broken Glass: it's a vivid and absorbing portrayal of life in the Aussie suburbs. I was continually impressed with how completely Stirling immerses the reader in the era ~ mid 1980's Aussie suburban life ~ utterly authentic and absolutely undeniably Australian.


There was just so much to love about this novel. Of course, there's the mystery surrounding why Andrew's sister has run away ~ and the suspense bubbles quietly under the surface throughout the novel:

'If I told you the truth, you'd run away as well,' she said so quietly that I could barely hear it. 'Go to bed, Andrew, and forget about everything.' p109

But it wasn't just the hook that captivated me while reading The Comet Box. It was the way Stirling holds a mirror up to suburban life, to human nature, to each character in the novel. He should win some sort of award for delving effortlessly into the minds of all the neighbourhood characters and beautifully, astonishingly, scarily depicting them. I could have been reading about a number of people I know and have grown up with O.O


I don't like to compare books, but reading The Comet Box reminded me very much so of the way Christos Tsiolkas explores Aussie themes/lifestyle/etc in The Slap (which won so many awards for it's honest & startling depiction) although The Comet Box is still entirely different. I didn't particularly enjoy The Slap but I so very immensely liked The Comet Box. And I think it was because our protagonist is so relate-able ~ and also due to the gritty, grinning sense of humour ~ OH MY GOSH there are some completely brilliant lines in there. It's pretty much an entirely quotable book.


I ate an apple and forgot to take the sticker off first - my mother was probably wishing that I'd saved it for the scrapbook.' p123 (loved Andrew's scrap-booking mum. So easy to imagine her)

Andrew is curious and right at that point in life where he is searching for answers and thinking about life and what it should be against how it is. And finding out things are not at all how they seem. Perfect YA themes. Kind of disturbing and addictive ~ as if reading you are spying on Andrew's neighbourhood. Andrew puts himself right in the thick of things and the climax of the novel really is heart-pounding. There's this feeling that anything could happen and things get perfectly wild and edgy and it's taut and everything a climax should be.
Apart from the main themes in the novel ~ I pretty much LOVED all the smaller events that took place. I have lots of favourite grin-worthy parts. A lot of them made me feel quite nostalgic. Here's some of my favourite scenes/moments:


I wondered why people were so happy when they were camping, when they left the things they owned. p 83 (adore Andrew's observations)

For a second, I wondered if the road in front of us and the hills in the distance were real or just a backdrop that could tear apart at any moment and leave us hanging in space. p159

Recommended: YES. It's the kind of book that is perfect not just for teens but also as a cross-over. Teenagers will be enthralled and adults can easily find truths in Stirling's book. The prose is atmospheric and it's an engrossing and at times harrowing read ~ but it's also nostalgic and absolutely Australian and the whole thing is just thread together masterfully. It's also the kind of book that would be engaging and packed full of ideas for students to study in (upper) high school.


And woah, this review got a little bit long, haha ;)

CBC Book of the Year


The Comet Box is also featured in Penguin Australia's first edition of OFF THE SHELF: new online magazine for teachers and librarians. It's an awesome resource and I am very impressed and think the idea is genius :D 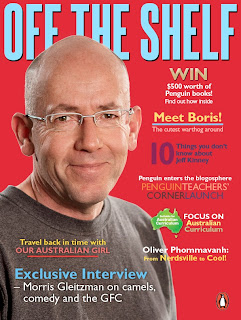 Subscribe and browse the first edition of Off The Shelf
Thanks to Pengiun Australia for sending this review copy
at May 25, 2011

Email ThisBlogThis!Share to TwitterShare to FacebookShare to Pinterest
Labels: Adrian Stirling, Aussie YA, YA Review