January: Mini Reviews and Other Things

I love January, long summer nights, kids home on summer holidays and so much reading time = bliss! I trawled a lot of blogs at the beginning of the month and stole a heap of reading recommendations from Faves of 2014 lists and pretty much maxed out my library card, ever hopeful to find a new favourite book.

Mostly I had a lot of DNFs, haha. This is mainly due to being overly ambitious with trying books that don't sound like my thing, and then they turn out to not be my thing... However, I love that I flew through so many titles on my TBR to shrink it down a little.

I read: 14 books all up (that number will shrink for following months as uni starts again in one week).

1. Here's two mini reviews from books I read in January (basically an unedited immediate reader reaction I threw up on goodreads)

Child of the Prophecy by Juliet Marillier

Both the first two books in the series ended up in my top ten of 2014 list. I really liked the premise of this (a flawed, villianously conflicted MC) and loved being back in the Sevenwaters world. However, this took me forever to read. At times I just felt it dragged on and not much at all happened, then suddenly major! exciting! events would unfold and then it would fall back into a lull again. Maybe it's just me not being that great at fantasy (I can be an impatient reader at times and this book requires settling in for the long haul). Or maybe this book needed a good hundred or so pages cut out? haha. Either way, Marillier is a gifted writer and I am hopeful I'll enjoy the next book in the series a little more than this one.

The Last Time We Say Goodbye by Cynthia Hand
This was one of my most anticipated reads for 2015. While it was captivating it didn't end up being a new favourite for me. I love Hand's writing, she creates characters and worlds that feel real. I was drawn into this story and there's no denying that the grief and devastation and the messy, hopeless aftermath of suicide is captured so well. Hand really focused on family relationships here (sibling love, divorced parents, mother-daughter, father-daughter, forgiveness and resentment).
I felt like I was navigating those same feelings while reading the book, and I guess that is a sign of author success? Personally, I felt so drained and exhausted upon completion. I wish there had been some reprieve or even brief moments of levity sprinkled throughout. [Selfishly, I missed some of the swoon factor that Hand did so well with Tucker and Christian in Unearthly, although it would have been out of place in this book.]  As far as YA suicide books go, it is another strong addition to the genre.

2. I reread three books this month and am so keen to reread more favourites. I never regret making time for rereads. So good to revisit fave characters and worlds. My fave reread was Winter of Fire by Sherryl Jordan. My gosh, I just love that book so much, it is still as brilliant and captivating as ever. It's an incredibly moving post-apocalyptic fantasy (set in our future, where the world is in eternal winter and the seas and sun are like a myth from long forgotten times). It also has much love on goodreads <3 (rating of 4.34 from 1,391 ratings ~ really great from a book first published in 1993) 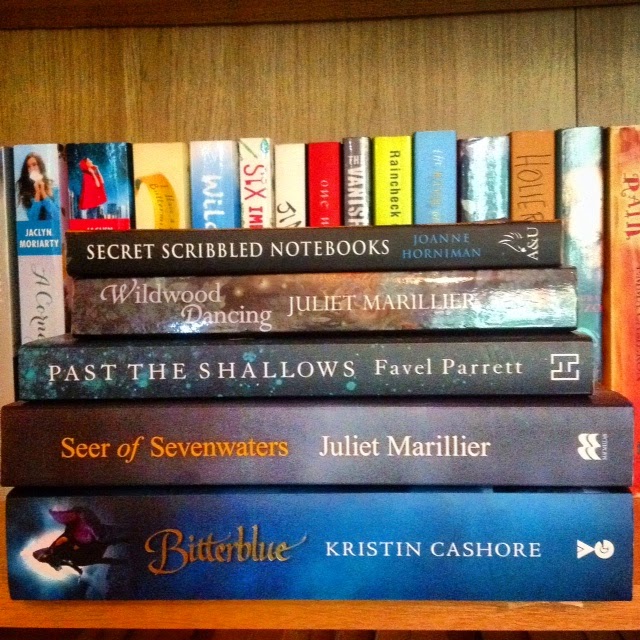 I am a huge book scavenger and my fave place to check for second hand books is Salvos and also Bloomfield (a little cancer charity shop opposite my daughter's school). Salvo's had a $1 book sale and I was so selective (I only pick up books that I really want to own). I got 4 Aussie YA's and a copy of Bitterblue to go alongside Graceling and Fire.

4. Books to look forward to

I added some more awesome books to my tbr. A new Honey Brown (have to wait until May)! Also a new Paullina Simons to look out for (April). I used to love her, back in the day, haha ~ so I'll be checking this out even though I have moved on a bit I'm still hopeful for some good escapism :)

Plus two stunnings covers for two contemporary YA novels. I first spotted these on Angieville and the both sound like my kind of read (fingers crossed I'll find a new fave here). Made You Up by Francesca Zappia and Between the Notes by Sharon Huss Roat.

5. My fave read of the month:
These two babies by Rosamund Hodge! Goes to show it does pay to try out books that don't seem like my thing ~ fairy tale mythical retellings, both brilliantly imagined and very captivating. Full review coming!

What about you guys? Did you have a good reading month?
What has been your favourite read so far?
at February 03, 2015