In the Skin of a Monster by Kathryn Barker #loveozya 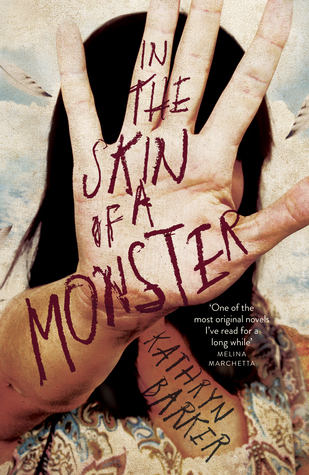 What if your identical twin sister was a murderer? Does that make you a monster too? A profound, intense, heartbreaking fantasy that tackles issues of fate versus free will, and whether you can ever truly know someone.Caught in a dreamscape, mistaken for a killer ... will Alice find a way home?Three years ago, Alice's identical twin sister took a gun to school and killed seven innocent kids; now Alice wears the same face as a monster. She's struggling with her identity, and with life in the small Australian town where everyone was touched by the tragedy. Just as Alice thinks things can't get much worse, she encounters her sister on a deserted highway. But all is not what it seems, and Alice soon discovers that she has stepped into a different reality, a dream world, where she's trapped with the nightmares of everyone in the community. Here Alice is forced to confront the true impact of everything that happened the day her twin sister took a gun to school ... and to reveal her own secret to the boy who hates her most.

In the Skin of a Monster is stunning, deliciously off-beat and totally absorbing. Completely unlike anything I was expecting or have read before and, even once I found my footing and got into the groove of the world, Barker still managed to twist things around until I was left with an unexpected lump in my throat and tears down my cheeks.

I didn’t read the blurb of this properly (common habit with me, I skim and dive in). I thought this was a contemporary novel -- but it’s a more genre-defying, drums-along-to-it’s-own-beat kind of book. I often struggle at classifying books but I would say this is fantastical while also having a contemporary reality mingled in. The novel is mostly set in a dreamscape -- in a town identical to the real-life Aussie outback country town, but this version is where the dreams the people in the town dream at night come to life. Like in a dream, things seem similar but are a bit off kilter. And, in this town, a lot of the people have been having nightmares... making the dream world ever-deadly. Confused yet? Ha, well, that’s part of the appeal. Starting this book felt a little like On The Jellicoe Road, or This is Shyness -- the reader is thrown in -- to gorgeous writing and unexpected situations -- and the reader has to fend for themselves a little (but don't let that deter you, it was not a brain strain with epic world building, it was easy to slip into). I loved that about this book. It just launches straight in and gradually things are revealed, and it’s beautiful and amazing.

It’s a visually stunning story (in my mind's eye) and totally haunting. There’s layers and depth, characters to care about (fabulous loyal and brave friendships with some enigmatic romance and swoon), and hard-hitting emotions that took my breath away.

This book is my sleeper hit of the year. Gorgeous and evocative and Aussie (that outback vibe!) and creative and original and harrowing just completely unexpected. The ending blew me away. I loved it. Everything about it.

In The Skin of a Monster @ goodreads

If you missed this book this year I am so urging you to bump it up your TBR ~ you might just find a new favourite like I have :)

Email ThisBlogThis!Share to TwitterShare to FacebookShare to Pinterest
Labels: #loveozya, Aussie YA, kathryn barker, YA Review 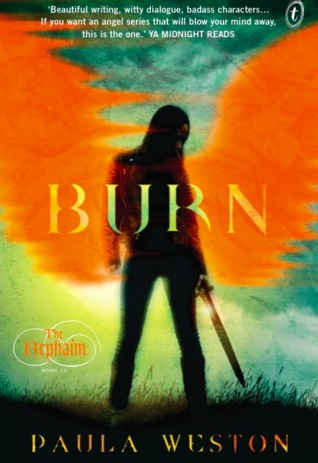 Suddenly, Gaby remembers everything.
For a year she believe she was a backpacker chilling out in Pandanus Beach. Working at the library. Getting over the accident that killed her twin brother.

Then Rafa came to find her and Gaby discovered her true identity as Gabe: one of the Rephaim. Over a hundred years old. Half angel, half human, all demon-smiting badass and hopelessly attracted to the infuriating Rafa.

Now she knows who faked her memories, and how—and why it's all hurtling towards a massive showdown between the forces of heaven and hell.

More importantly, she remembers why she's spent the last ten years wanting to seriously damage Rafa.
Mate, it truly is a bittersweet feeling to come to the end of one of my fave book series. I have mentioned numerous times how much I love Paula Weston’s Rephaim series. Not only has each book delivered above and beyond my expectations, they have given me something special to look forward to each year (okay, they also drove me crazy -- I was desperate for each new installment). I have agonised over reviewing the 4th and final book in the series as it's hard encapsulate how much this series has meant to me.

I moved interstate in 2012 and Shadows (book one) was the first book I read in my new house. I was apprehensive about trying an angel-themed book (paranormal and I do not usually gel). I began with just checking out the 20 pages and was so hooked that I read it almost in one sitting, surrounded by boxes I should've been unpacking. Confession: I have since reread those first 20 pages numerous times, it remains one of my fave first chapters of any book. Such compelling writing, characters, a great hook and an amazing kiss-chemistry-intrigue scene with one of the coolest meet-cutes ever.

I have insanely looked forward to each annual release in the series and they have always always delivered, meaning June has been a reading month to get excited about for the past 3 years (what will I do without my fix in 2016?)

I don’t know what I can add to my already gushy reviews for this series (Shadows, Haze and Shimmer), so this review is a little ode to the series overall. The Rephaim series is my fave paranormal series and also one of my fave series of all time (any genre).

I finished Burn and had such a bad book hangover I actually went back and reread the first 3 books, and then Burn again. (and this was after rereading the first 3 books just prior to Burn’s release in preparation). I am already looking forward to my next reread (I'm spacing it out a little so hopefully some leftover first-read magic will still linger in the pages).

This series stood the test for me -- it wasn't just an awesome first-time gulp, but rereading was just as brilliant as the initial reads -- even better in some ways, now that I had formed better connections with the characters, it was like visiting old friends, rather than meeting new ones.

The slow burn build and antagonistic yet genuine-real-depth relationship between Gaby and Rafa is second to none. The pay-off in Burn is more than worth it and fans will be fanning themselves (haha, cheesy, but lol, it's true! ;))

Rafa. My gosh. Total babe. I am not overly swoony in books but I defy anyone not to be... at the very least, smitten, haha. Events in the 4th novel just made me crush harder, exposing new vulnerable and admirable qualities in him. He is in my top ten literary crushes ~ and he's a stand-out Aussie guy (for those who like their literary swoons Australian!)

The Aussie flavour and vibe is really unique and refreshing. Also, tangled in is lots of international settings, which I loved. Nothing beats being whisked away to foreign and rich settings when reading.

Weston’s plotting is impeccable. She weaves dual timelines and unveils threads that has readers guessing - dying -- to know what is really going on.

If you haven’t started these series yet, I don’t know where you have been (!!?!) but you need to rectify the situation asap. And, unlike early fans who waited an agonising year between each release, you can binge-read and get swallowed whole by the outstanding world Weston has created. The good news for me is I plan on revisiting Gaby and Rafa and Jude and the Rephaim in coming years - they have become fixtures in my literary life and, like all fave literary characters, I like to imagine them out there, living out their lives. I have the added bonus of living near some of Weston's location inspirations (such as Noosa on the Sunshine Coast) so when I visit Noosa, I always feel like I am in Gaby's world and I love love love that literary world blending into my real life.

I realise I haven't actually said much about Burn specifically. It was amazing. It was everything I hoped it would be and more. I loved it.

Also, isn't the cover stunning? Such a gorgeous looking series x
Burn @ Goodreads 4.41 rating with over 1000 ratings
Burn @ Text Publishing
Paula Weston's blog
Paula Weston lives in Brisbane with her husband, a retired greyhound and a moody cockatiel. Burn is book four in The Rephaim series after Shadows, Haze and Shimmer.


Many thanks to Text Publishing for my gorgeous review copy!
at December 17, 2015 3 comments: