No and Me by Delphine De Vigan 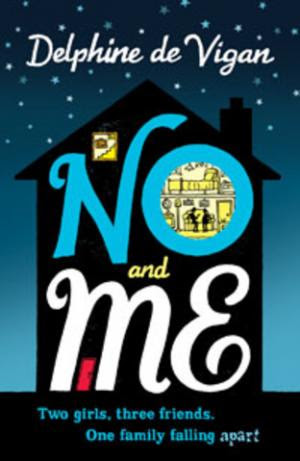 The international award-winning story of two girls from different backgrounds, united in friendship

Parisian teenager Lou has an IQ of 160, OCD tendencies, and a mother who has suffered from depression for years. But Lou is about to change her life—and that of her parents—all because of a school project about homeless teens. While doing research, Lou meets No, a teenage girl living on the streets. As their friendship grows, Lou bravely asks her parents if No can live with them, and is astonished when they agree. No’s presence forces Lou’s family to come to terms with a secret tragedy. But can this shaky, newfound family continue to live together when No’s own past comes back to haunt her?

Winner of the prestigious Booksellers’ Prize in France, No and Me is a timely and thought-provoking novel about homelessness that has far-reaching appeal. (from goodreads)


Ahhhh, this book is just CHARMING.


I had no idea what to expect or if No and Me would be my kind of read ~ I really didn't expect to LOVE it as much as I did. It's a really different read to most contemp YA's I've read lately ~ which could be because this is imported and translated from French.


I think this is the kind of book that some people will ABSOLUTELY ADORE and soak up and fall in love with. It may also leave other people scratching their heads and 'just not getting it'


I am in the FALLEN IN LOVE category :)


It's very much a book for people who appreciate literary fiction, lyrical writing and just poetic and gorgeously funny sentiments. This is due to the CHARMING and unique narrator, Lou ~ who has leapt on to a list of protags I ADORE.


I'm not going to go much into the plot (you should discover it for yourself) but it centres around Lou (who's 13 ~ but skipped two years of school and is with the 15 year olds) and No ~ who's 18 and homeless. I wondered if it would be too MG for me (with a younger narrator) ~ but it's the opposite ~ it could easily slip into adult sales with it's intelligent and gorgeous protag and it's outstanding prose. It really is a cut above in terms of YA literary fiction ~ I was continually pausing to re-read sentences and paragraphs and just to make sure I was not missing out on even one perfectly placed word.


Alongside Lou and No, there's Lou going to school (and the usual coming of age school stuff ~ parties and a crush ~ there's always a guy, hey ~ and assignments) and also Lou's parents ~ who I loved as characters. Lou's mum was beautifully handled ~ there's some painful family history and some mental illness and it was achingly told.


The plot unravels at a steady pace, gradually revealing secrets and also moving forward to a conclusion that makes you feel like you just don't know what is going to happen. (I really didn't ~ it could have gone so many different ways)


But it's not the plot that had me enthralled (although I was invested in the story). It was the writing. I felt like I could keep pausing to jot down half the book into my journal of favourite quotes. I haven't crushed this hard on writing for a LONG time ~ it was perhaps reminiscent of Maggie O'Farrell and Sonya Hartnett for me ~ authors who make me gasp and think and just revel in words and ideas and sentiments.


Overall ~ it's a hopeful book, it'll break your heart a little, it'll make you think. It's nostalgic of the teenage years and the hope and optimism that surrounds them. It celebrates wanting to change the world, believing you can while at the same time feeling completely swamped and disenchanted and wildly fluctuating between everything. It's about family and friendship and growing up. It's just lovelylovelylovely. Le sigh...


It's FRENCH YA (oooh, la la) from an award-winning novelist. It's gorgeously different and begging to be read.


Has anyone read this? Tell me you LOVED it :D


No and Me @ goodreads

And a few different covers, just because :)
I'm loving the 'No & Ich one ~ gorgeous and evocative!

Email ThisBlogThis!Share to TwitterShare to FacebookShare to Pinterest
Labels: delphine de vigan, French YA, YA Review