What Happened to Goodbye by Sarah Dessen 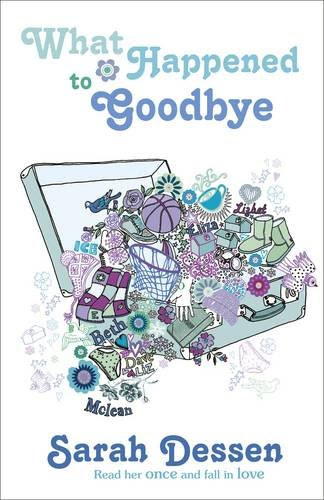 Mclean never lets herself get too attached . . .
After the scandal of her mother's affair, Mclean and her dad chose life on the road. But since losing her family and home, Mclean has lost herself too; she's been Eliza, then Lizbet, then Beth - changing her name as often as she changes towns.

Until now. Her new neighbour, Dave, is like no one she's met before. Is as if she's always known him, and just like that, she becomes Mclean again.  Is it finally time to stop reinventing? Or will Mclean turn her back on the new life she loves, without even saying goodbye . . .(from publisher's site)
Sarah Dessen is perhaps the most famous and most beloved of contemporary YA authors. Her books and characters worm their way in readers lives and frequently top peoples favourite books of all time lists.


Me and Sarah Dessen: I read my first Sarah Dessen in 2008 (Lock and Key) without having heard of her ~ and absolutely loved it... then proceeded to check out all her back-listed titles. Some of which I adored and are favourites of mine (perfect for a rainy-day comfort swoon-y read), but others have left little impact and been quickly forgotten. So I guess you could say she's a little bit hit and miss for me. Fans are also split on their favourite titles so it’s hard to predict which of you will find What Happened to Goodbye bumping on your favourites list ~ and which of you will find it all a little too meh (like me).


What Happened to Goodbye has no huge inciting incident or great source of tension. Instead the book quietly unfolds in layers: each time Dessen revisits a scene/sub-plot, she goes just a little bit further than the previous time ~ giving more depth and insight into her characters lives, relationships and what makes them the way they are. Ad infintum and you reach the resolution: where Dessen has begun with isolated characters she ends with a motley group of friends who have bonded and each come to some form of self-actualisation.

Dessen immerses the reader completely in her characters lives. She is the queen of exploring relationships and the subtle things that connect family's and friends. She takes her time in creating atmosphere and introducing characters with all their nuances ~ and she does it well.

There was no mistaking Dessen’s signature prose when first diving into What Happened to Goodbye. Even without her name on the cover I could easily pick her as the author. There's an instant sense of familiarity when opening up the books (from having read her previous work).

So here’s what I enjoyed (& what you have to look forward to):


Despite the parts I enjoyed, overall I was left feeling underwhelmed :(

I personally prefer my books to have a bit more urgency to them (even if it is a quiet urgency).The lack of tension or driving force with any of the sub-plots resulted in me being less engaged than I would have liked. If it hadn't been a "Dessen book" with some form of expectation I am not sure I would have made it past half-way.

While Mclean struggled to "find who she was" I struggled to get a feel for her. She was just a Dessen-esque 'narrator-voice'. The secondary characters certainly out-shone her. However, she was relate-able in that 'every-day-girl' sense.

I won't deny that my favourite parts of previous Dessen novels have been the swoon factor... and it was a little bit lacking here. I am not sure what technique Dessen was trying to employ with the romance, but there was no pull of attraction or tingly sparks between Mclean and Dave (although Dave himself was a cool enough character, he just did not work as a love interest for me). I would say this book was more about family and friends more than a romance-y read.


Recommended: The thing is ~ despite the areas I personally struggled with, there's no denying that Sarah Dessen writes fantastically for teens. This is a book for anyone who has ever struggled with "finding themselves", fitting in and figuring out who they want to be. It's a classic Dessen and you can feel that she's poured all she has into bringing these characters to life on the pages.


I did feel disappointed but I'm sure part of that comes from my high anticipation and how it seems all too easy to remember my past Dessen Reading Memories: the swooning and the sighing and the falling in love with characters lives which didn't happen for me here. I haven't meant to write a negative review but rather to be honest (and there's still plenty in this book to love despite my discussion points in the second half of the review). No disappointed review would've kept me away and I'm still anticipating whatever she writes next (there's just something about her). Also, looking forward to seeing what you guys think of What Happened to Goodbye :D

As for my favourite Dessen book (most people have one...) I am torn. I have read all her books (apart from Dreamland) and on my shelf at home are four keepers of hers that I love for different reasons:

If you haven't read her yet, GOSH, you should definitely check her out (!) asap. You could start with her latest title (which has some glowing reviews elsewhere) or check out one of my faves above :)


Thank you to Penguin Australia for providing me with this review copy :)
at May 15, 2011

Email ThisBlogThis!Share to TwitterShare to FacebookShare to Pinterest
Labels: sarah dessen, YA Review