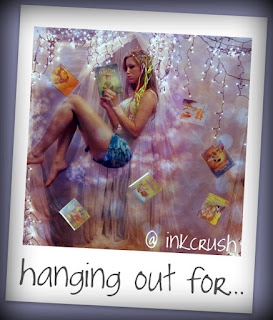 Hanging out For is a feature of inkcrush where I chat about books that have snagged my attention. This is my numero uno post of the feature ~ and today I'm featuring:

Five 2012 Contemporary YA Debuts that I'm hanging out for...
[check out these books on goodreads by clicking on the title link]


Hannah believes she's being brought from Moldova to Los Angeles to become a nanny for a Russian family. But her American dream quickly spirals into a nightmare. The Platonovs force Hannah to work sixteen-hour days, won't let her leave the house, and seem to have a lot of secrets - from Hannah and from each other. Stranded in a foreign land with false documents, no money, and nobody who can help her, Hannah must find a way to save herself from her new status as a modern-day slave or risk losing the one thing she has left: her life.


Oh ~ This sounds perfectly intense and moving and I am a HUGE advocate of the A21 Campaign  and am incrediby moved and incensed at the thousands of girls who are currently being trafficked (did you know human slavery is at an ALL TIME high, right now today, with more slaves in the world than throughout any time in history *steps off soap box* ;)


Anyways, very thrilled to see this premise and cannot wait to read it.

* also recommended: the movie, Taken, with Liam Neeson (LOVED it) and the captivating Tess Gerritson novel, Vanish if sexual trafficking interests you (you know what I mean)

2. This is Not a Drill by Beck McDowell


Beck McDowell’s young adult THIS IS NOT A DRILL, told from alternating viewpoints of two teens who must protect kindergarteners from a soldier with post-traumatic stress disorder who opens fire in the classroom,for publication in Fall 2012.


This also sounds intense and dramatic and compelling...


3. Fall To Pieces by Vahini Naidoo


Seventeen-year-old Ella Logan knows that Mark and Petal are lying about the night their friend, Amy killed herself. But Ella won’t let them bury the truth along with Amy’s body – she’ll do anything to unearth what they’re so desperate to keep secret. Even if it means a fake friendship with a new boy, who reeks of gunpowder and treachery. Even if it means throwing herself off bridges and into the face of deadly questions. Was Amy’s death really a suicide?


Cheating with this one as I read an early draft and Vahini Naidoo writes SO gorgeously. She is one debut author to watch out for (also, wrote the first draft while still in high school - WOW). Although I read an early version, I am still pumped to see the final product.


A powerful debut novel about a young Marine's return home from Afghanistan and the new life and love he finds while fending off the ghosts of war. When Travis Stephenson returns home from Afghanistan, his parents are on the brink of divorce, his brother has stolen his girlfriend and his car, and nightmares of his best friend getting killed keep him completely spooked. But when he runs into Harper Gray, a girl who despises him for trashing her reputation with a middle school lie, life actually starts looking up. As Travis and Harper see more of each other, he starts falling for her and a way through the family meltdown, the post-traumatic stress, and the possibility of an interesting future begins to emerge. His sense of humor, sense of his own strength, and incredible sense of honor make Travis an irresistible and eminently lovable hero in this fantastic and timely debut novel.


This one already seems to be high on people's radar. The first chapter is on Trish Doller's site (very compelling male POV) and early reviewers have confirmed this is something to genuinely be excited for. I'm thinking I'll break out the saving ans indulge in a hard cover for this one :)


A boy everyone calls “Butter” is about to make Scottsdale High history. He’s going to eat himself to death live on the Internet – and everyone will watch. He announces his deadly plan to an army of peers and expects pity, insults or even indifference. Instead, he finds morbid encouragement. When that encouragement tips the scales into popularity, Butter has a reason to live. But if he doesn’t go through with his plan, he’ll lose everything.


Wow ~ this is different and the stakes sound high and I am anticipating some great emotional moments. Really excited that Butter is finally nearly here :)

What about you?
Are any of these books on your radar?


Comind up next in my 'Hanging Out For' is a bunch of Aussie YA 2012 releases (and once I started the post, I realised just how mucb Aussie goodness we are in for this year. It's going to be a fab reading year)
at January 17, 2012

Email ThisBlogThis!Share to TwitterShare to FacebookShare to Pinterest
Labels: hanging out for