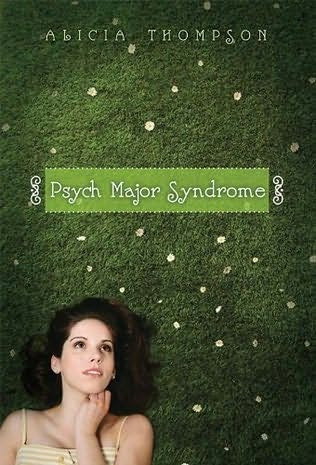 Using the skills you've learned so far in Introduction to Psychology, please write a brief self-assessment describing how things are going in your freshman year.

Presenting Concerns:
The Patient, Leigh Nolan (that would be me), has just started her first year at Stiles College. She has decided to major in psychology (even though her parents would rather she study Tarot cards, not Rorschach blots).
Patient has always been very good at helping her friends with their problems, but when it comes to solving her own...not so much.
Patient has a tendency to overanalyze things, particularly when the opposite sex is involved. Like why doesn't Andrew, her boyfriend of over a year, ever invite her to spend the night? Or why can't she commit to taking the next step in their relationship? And why does his roommate Nathan dislike her so much? More importantly, why did Nathan have a starring role in a much-more-than-friendly dream?
Aggravating factors include hyper-competitive fellow psych majors, a professor who’s badly in need of her own psychoanalysis, and mentoring a middle-school-aged girl who thinks Patient is, in a word, naive.
Diagnosis:
Psych Major Syndrome
Psych Major Syndrome is Alicia Thompson's debut which came out in August 2009 (which sounds like ages ago now that we're in 2011...)
I wanted to read it for AGES. Set in college. With an older protag. It sounded fun and maybe a little bit mad crazy. Which is how I love my books to be...
When I finally got it, I started reading and couldn't put it down. Sneakily, (despite my, erm, new years resolution Reformed Sleeping Habits Commitment) I stayed up until 3:30am to finish it.
It's probably an odd book to find un-put-downable. It's not because I was sucked in to the plot, or waiting for some major twist/secret to be revealed. It's because I was JUST HAVING SO MUCH FUN reading it. It was compulsively addictive.
It's gorgeous.
And KINDA SWEET with this FUNKY VIBE. It's FUNNY (oh, I so love books that make me grin) and often cringe-worthy and honest and, dear God, I was also in a state of swooning and sweating over Nathan. Boy, talk about a new fictional crush. Phew...
Leigh felt like every-girl. I so loved her with all her flaws.
It's not a deep book. It's not going to blow your mind. It won't have you on the edge of your seat. You can kind of see the ending coming. You get things before our spunky, OCD protagonist does. Okay, sometimes way before she does. You sometimes want to scream some sense into her. But you just love being taken along for the ride. (I've slipped into second person POV here :)
I haven't really said what it's about. Mainly it's just about Leigh and her first year of college, classic coming of age stuff. Growing up and freaking out and  wanting to lose your virginity and figuring out what you want to be and how to get there, yada yada yada.
It's an older YA read ~ a few older themes but still done in a squeaky clean kinda way.
My fave part? The road trip with Nathan and thanksgiving back at home.
Psych Major Syndrome @ goodreads
Recommended: This one is for fans of Rebecca Sparrow and Kirsten Murphy's Raincheck on Timbuktu. It's like a witty, fun-filled blend of these three books (below) ~which are favourites of mine.

Others have recommended it for fans of Meg Cabot and Megan McCafferty's Sloppy Firsts series. I can see why ~ it's reminiscent of both their work. I personally loved it more than Sloppy Firsts and Meg Cabot's work. It's got a bit more of a funky edge. Think, throw in a little bit of Beatle Meets Destiny...

and now I'm getting carried away... haha.
So I recommend it for fans of contemporary.
For when you're in the mood for a rainy day comfort read.
In the mood for grinning and swooning and just relaxing into a slightly crazy, fun story.
I'm not ashamed to say I've already re-read parts of it, curled up in the hammock the next day (after pulling my all-nighter).
It's a new favourite of mine because books like this just make me happy
I could find so many quotes that I adored to give you a taste... but here's the opening, where Leigh fills out this psych evaluation dooby:
ROTTER INCOMPLETE SENTENCES BLANK

1. I like... to read incredibly unrealistic and badly written romance novels.

3. Back home... the house smells like incense all the time

4. I regret... buying Avril's first album on the basis of one song

6. I am... very sensitive about the weirdest things

9. A mother... can really embarass you sometimes, espescially when she insists on bringing her tarot cards to all parent-teacher confrences

11. My greatest fear is... of being stranded in the desert or buried alive. Or never finding happiness.

17. I hate... the way parking services hunts you down.

18. This school... is a small liberal arts college in California.

19. My father... wears an eye patch as an affectation.

Email ThisBlogThis!Share to TwitterShare to FacebookShare to Pinterest
Labels: Alicia Thompson, YA Review